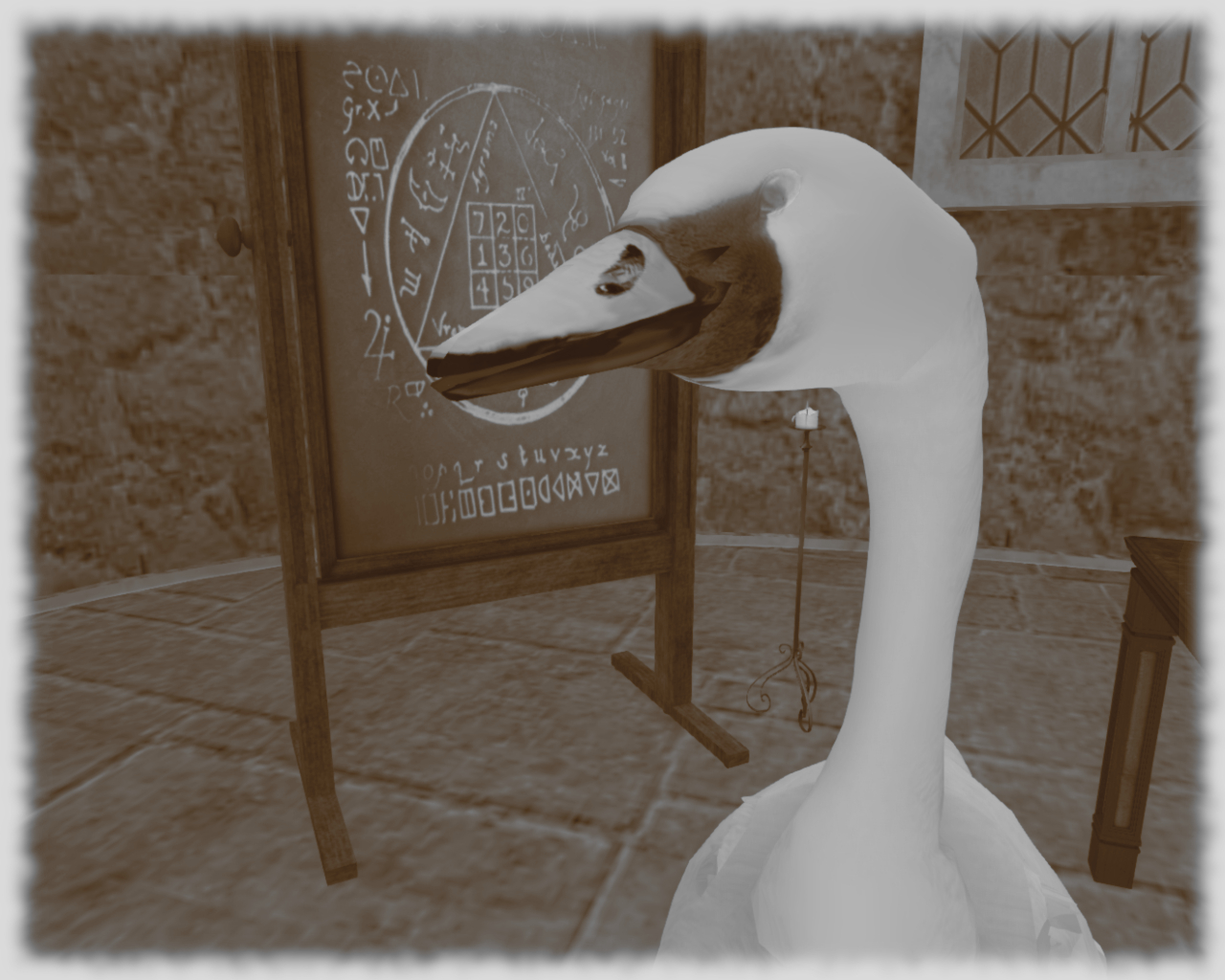 Hello and welcome to my third interview for Owl Club. This time, I talked to not a new Professor, but an old Professor. She has been at Hogwarts for almost two years, I think. Her name is Daffodil Banks, and she teaches us Transfiguration. She also can turn into a goose. I sent Wobble to Professor Banks to ask her to talk to me. It was the very first letter he ever carried! He was very happy. I talked to her in the Transfiguration classroom. She gave me tea and biscuits, and that was very nice. By the way, I still think there should be more owls in Owl Club. Wobble was just as lonely this time as he was last time, but at least Lottie had owl treats for him, and he liked that very much.

Professor Banks gave me a teacup, because I had to smash mine into its smallest bits for Alchemy class, and those pieces are very small. Anyway, here are the questions I asked, and here is what she said. I think. If anything is wrong, that is probably my fault. I am still learning the English, and it is a lot better now, but sometimes I still have problems.

What is your first name?

She says her first name is Daffodil, like the flower. I have a long name too, but nobody uses it. They all call me Timmy, and I like that. So I asked her if people call her ‘Daffy,’ which is like ‘Timmy.’

Where are you from?

She said she is from London, and then she asked me where I am from, so of course I told her all about Rhyd Ddu and Yr Wyddfa in Gwynedd. But she did not say anything else. Maybe she did not want to talk about it.

How long have you been teaching Transfiguration?

She said that this is her second full year of teaching it. She also said it was one of her favourite subjects in school.

Because there is something beautiful in it about turning things into things. Some people think it is scary. I think Muggles probably think it is scary. But she likes it. But then again, she is a witch. She said something about science and art combining to make something new. I wonder if she meant new monsters, but I forgot to ask her about that.

What is your favourite sweet?

Lemon Drizzle Bomb Cakes. She said that it is like fire working in your mouth, which sounds uncomfortable, or even dangerous. When I asked if it would hurt, she said it was like a pop, but that did not make me feel any better about it, because I do not like the idea of something popping in my mouth. Anyway, she gave me one. It was good! I forgot to ask her where to get Lemon Drizzle Bomb Cakes, but they are worth getting.

What did you do before you came to Hogwarts? Where were you?

What is your favourite colour? Is it blue? (She was wearing a dress with a lot of blue.)

Professor Banks thinks all colours are pretty, and says that she can not pick just one.

How long ago were you at Hogwarts? Was it a very long time? What House were you in?

She said it was a very long time ago, but did not want to say anything else except that she was a Hufflepuff.

The friendships we make here. She said we make life-long friends that will always see us. Or maybe see through us? Or see us through things?

She does not like detention, but she will give detentions if she thinks she needs to. She said she does not do as much as others. But she does do it. So maybe do not be bad in Transfigurations.

Do you have anything you want to say to the Hogwarts students?

She wants us to put our chins up in the air, and to keep practicing. I do not know why our chins should be up like that, but she did not say why. I forgot to ask why. Maybe this is some sort of Saesneg thing.

Do you have a pet?

The Professor said that she does not have a pet. However, she does give names to all the mice that the students turn into things in class. I do not know if it makes them pets, but I would not want to turn Wobble into anything because I like him. So I do not know if she likes the mice or not. Maybe not. But she did give them names. So I am confused, and I forgot to ask her about that. Because when she talked about turning animals into things, that reminded me that she turns into a goose. She has done this in class. So I asked her:

How did you learn to turn into a goose?

Maybe she thought the question funny, because she laughed. Or honked. When she laughs it kind of sounds like honking. Anyway, she said a professor helped her in her Sixth and Seventh Years. Also she had a friend who also learned to turn into a goose.

Why did you learn to become a goose?

She said she did not choose the form. I think she said it is because there is a goose inside her that gets reflected. Or something like that. But I am still learning the English. She said a goose is protective for homes and children. But I am not sure, because I have met geese who were never protective about me. They would get very mad at me if I got too close. Maybe this is a matter of point of view.

When you turn back into a human, do you remember what happened when you were a goose?

She said yes. She is the same as a goose. She remembers everything, but she can not speak, only honk.

We talked more about her turning into a goose, and how it is not the same as turning someone else into a goose. But I asked if she would turn into a goose for me, and she said yes and turned into a goose. She is a large white goose with a black beak. I had to look up the word ‘beak’ because I know that ‘mouth’ is wrong, even if it is also her mouth. I asked her if she could talk as a goose, but she shook her head. Just like a person. It was funny to see her goose head going back and forth.

I had borrowed a camera, so I took a picture of Professor Banks. Then she kind of pecked at my hair. I suppose she was done with the interview, so Wobble and I left the Transfiguration room. Anyway, Professor Banks is a nice goose who likes Lemon Bomb Drizzle Cakes, and will give you detention. Do not call her Daffy. She does not like that. Maybe she will honk at you. And then give you detention.