The HUD functions are organised as follows:

I. The Cast Bar

The Cast Bar appears when you touch that little button above the HUD’s badge. That button is available even when the HUD is hidden/minimised. When you click any of the first three buttons, you can type in the name of the thing you want to do (Levitation Charm, Colour-Changing Charm, Antidote to Common Posions, etc) or the incantation of it in case it’s a magic (Wingardium Leviosa, Collovaria, etc). You can also type the name/incantation only partially (like “levi” or “col” or “anti”) and the HUD will find the appropriate spell; it will pick the first one in case there are multiple ones that fit the criterion (such as Lumos vs. Lumos Solem). 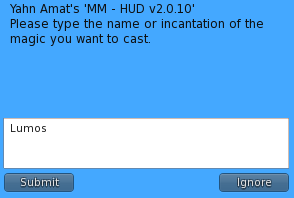 Upon submitting, the HUD will tell you whether you succeeded or not at casting that spell/transfiguration or brewing that potion, and your titler will change to reflect that. If you’re a sixth-year or above, when you submit a spell/transfig you will also have the possibility of casting them nonverbally.

In Herbology and CoMC, you have two different consecutive rolls. First, you need to choose which plant/creature you wish to identify: When you submit, you will perform the id roll, which will determine whether you correctly recognised that creature/plant for what it was.

Then, if you succeed at identifying a plant/creature, the HUD will prompt you for a further roll, to care for it.

If you fail at identifying the creature/plant, you will not be prompted for the care roll.

Arcane is the new skill that replaces Divinations in the old HUD. It’s a catch-all skill for, well, arcane knowledge, such as Divinations, Ancient Runes, or Alchemy. Unlike the other skills, it doesn’t have a specific target such as a single rune or anything, but rather “ranges” of targets, identified with letters of the Hebrew alphabet. When your Professor tells you to roll Arcane for their subject, they will also tell you what range counts as a success. For example, if to correctly draw a certain Alchemical Circle you need to roll a He in Arcane, you will click the button and type “He” in the text box: 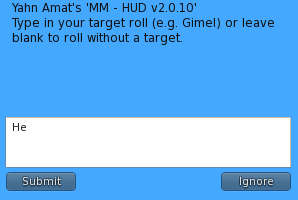 Cheat Sheet: In order from lowest to highest, the possible Arcane rolls and the levels they’re equivalent to are:

Rolling a Taw is always a critical failure, and rolling an Aleph is always a resounding success.

It’s pretty much exactly what it says on the tin. Since most of the time you’ll be using Dodge will be when duelling, the next section will be more relevant. When you click this button, your HUD will simply tell you whether you succeeded at dodging or failed.

IMPORTANT: Remember that each roll must be described in a post. Whether you succeed or fail, when you roll to do anything you should post to describe your actions before attempting to roll again. That means that you need to roleplay each single failure individually before you’re allowed to try to do something again (and each success, though this is less relevant). The only exceptions are for CoMC and Herbology, where both identify and care count as a single roll, and Duelling (explained below), where Defence and Attack must be explained in a single post.

P.S.: For more inconsequential/casual posts where you know other people won’t react to each individual roll of yours, it can be okay to conflate multiple rolls in a single post. However, if you do, you must describe each roll separately, so if you failed 3 times before succeeding at a spell, you must describe each failure individually and not mix them all saying “so-and-so failed 3 times then succeeded.”

When you click the “Duel” option of the Main Menu, you’ll be prompted with a list of people nearby you can challenge to a duel. 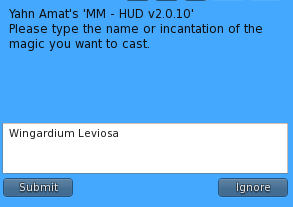 If you try to click another skill while you’re in a duel, you will be told you can’t use it.

Once you choose your attack, you will receive a message confirming what you used and asking you to post your attack.

Once you post, they will be told about it, and will be prompted to choose a defence.

After they pick their defence, the HUD will tell you both privately whether the defence was successful or the attack was. Then, before the other person posts anything, they must pick an attack.

After both defence and attack have been chosen, the player will type their post starting with a description of how they defended and then explaining what they used to attack, and after their post you will be prompted to pick a defence, or try to Dodge.

Rinse and repeat. At any point, either of you can touch the Main Menu and click “Duel” again to end the duel.